Turmeric Milk is full of anti-inflammatory and antioxidant properties and is the perfect warm drink to sip on over the winter months! 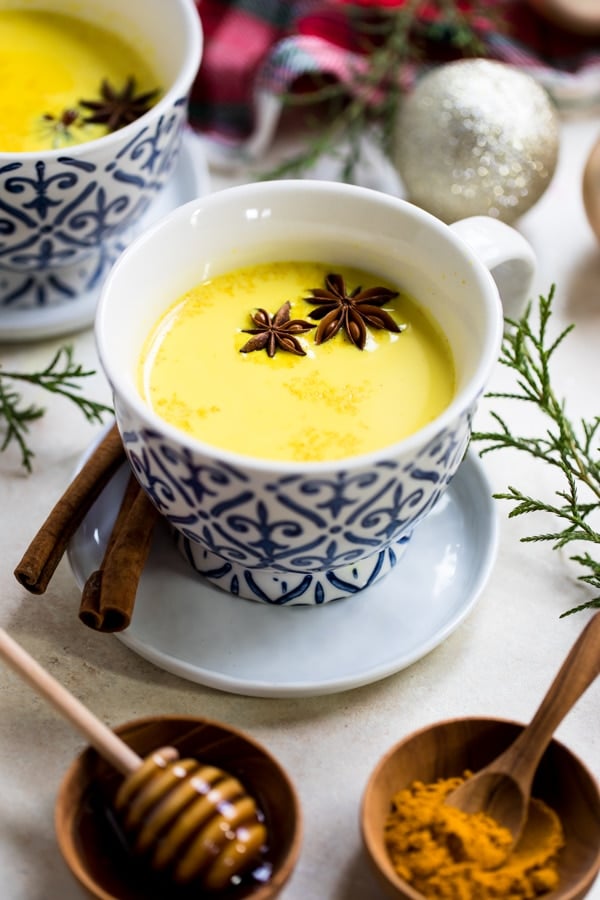 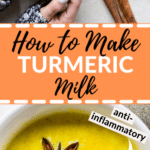 If you’re looking for another nighttime drink to have besides hot tea, you’ve come to the right place!

There are so many health benefits of turmeric, but I often find myself not knowing where to use it in my cooking.

I’ve started to use it in soups, salads, smoothies, and even use it to give my cauliflower popcorn that golden buttery look.

The other day when I was on Pinterest, I saw someone pinned turmeric milk (aka “Golden Milk”) and I was SO excited to see what the hype was about and decided to make some of my own.

I put my own spin on this turmeric milk recipe and added in additional spices to make this drink even cozier.

What is golden milk?

Turmeric golden milk is a traditional Indian drink that’s made with warm milk and turmeric. Other spices and sweeteners can be added to make turmeric milk more palatable, but the simplest turmeric milk recipe uses just two ingredients.

This drink is crazy healthy for you.

The concoction of ingredients gives those other health smoothies a run for their money.

According to the Food & Nutrition Magazine by the Academy of Nutrition and Dietetics, turmeric is known to aid with digestion and liver function, help relieve arthritis pain, aid with heartburn, stomach ulcers, gallstones, inflammation and even may prevent some cancers.

Curcumin is the chemical found in turmeric and it may have anti-inflammatory, anticancer, and antioxidant properties, according to early findings from animal and lab studies (the findings have not been confirmed in humans).

Turmeric milk is not only good for you but its delicious too. The bold, warm, and earthy flavors win me over every time. I hope you like it too!

Like I said, you can play around with the spices in this turmeric golden milk to find what you like best, but for this particular recipe I used:

How to make turmeric milk

What I love about this turmeric milk recipe is that it’s so easy to make. It does require a little more effort than boiling a cup of tea, but not much more!

To make this turmeric golden milk, simply add all the ingredients to a small saucepan and bring to a light boil.

Turn the heat to low and let the golden milk simmer for a good 20 minutes to allow the flavors to come together.

Before serving your turmeric milk, strain it through a cheesecloth, if needed (if you’ve used whole peppercorns, for instance).

Can I use any type of milk?

Yes, this turmeric milk recipe is very flexible and can be made with any type of milk (both dairy and non-dairy milks would work).

Just make sure you’re using unsweetened milk, otherwise your golden milk will be too sweet.

Can I use fresh spices?

I haven’t played around with using fresh ginger or fresh turmeric in this recipe, but I’m sure you can use them instead of dried. If you make this turmeric milk recipe with fresh spices, please leave me a comment telling me how you made it so I can try it out myself!

It’s really important that you let the turmeric milk simmer over a low heat. If the heat’s up too high, you might scald the milk, which would make the turmeric golden milk taste slightly bitter.

If you don’t have cinnamon sticks, you’re welcome to add a little extra ground cinnamon instead. Or omit the cinnamon altogether if you don’t like it — this recipe is super flexible.

Turmeric milk is best right away, and I don’t recommend making this recipe in advance. Enjoy it while it’s warm, and try not to fall asleep before you finish it!

One Pot Mediterranean Chicken and Rice 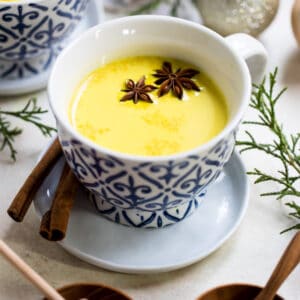 *You can use any type of milk in this recipe (both dairy and non-dairy milks would work). Just make sure you’re using unsweetened milk.
Find Kroll’s Korner on Instagram!Mention @krolls_korner or tag #krollskorner