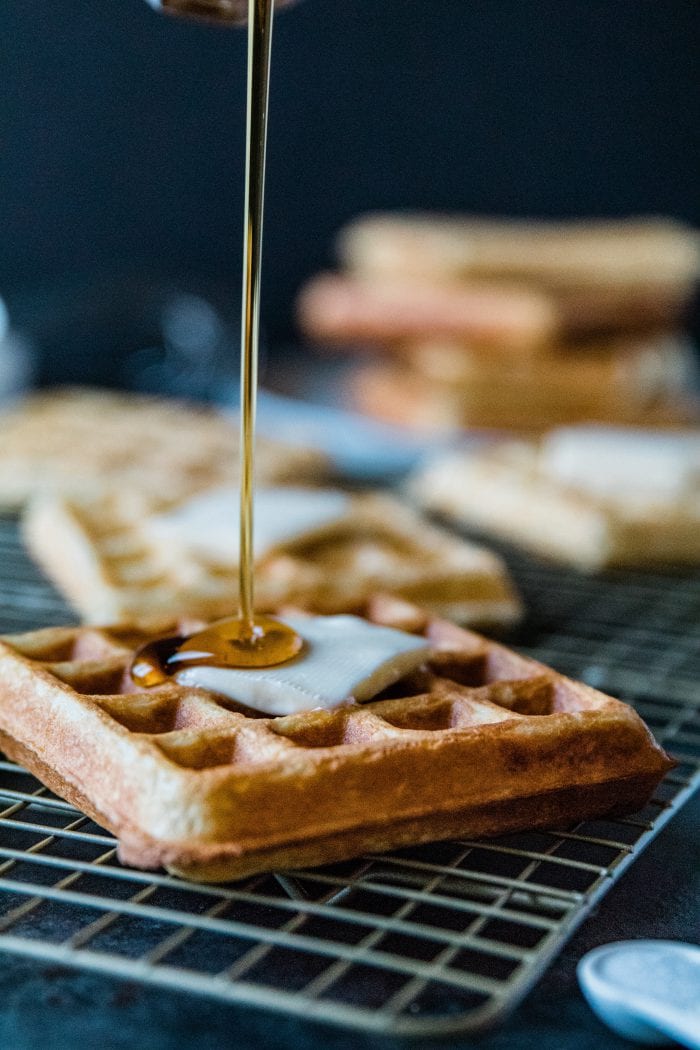 Stack up these Classic Buttermilk Waffles From Scratch for breakfast for the family! They are tender, not too rich, and perfectly crispy on the outside!

I hope you all had a wonderful Christmas! We made our favorite buttermilk waffles for breakfast and they never disappoint. Everyone loves the recipe so much, so I figured it’s time to post for you guys!

Waffles from scratch are such a classic breakfast and brunch necessity. These homemade waffles have an incredibly tasty golden brown exterior and a soft, pillowy inside. I think my favorite part of these buttermilk waffles are the perfect pockets that can hold peanut butter, maple syrup, butter, fresh berries, whip cream, and the list goes on!

Making waffles from scratch is 100% less intimidating than you may think. Or if you feel like it will be a hassle, I am telling you this recipe is EASY PEASY.

You’ll need to separate the egg yolks from the whites, and it’s key that none of the yolk gets into the whites. If any egg yolk is in the egg whites when you go to whip them, they won’t fluff up properly.

How to make waffles from scratch

Once the egg whites have been whipped to soft peaks, gently fold them into the homemade waffle batter and then let the mixture rest for 10 minutes before making the waffles. You’ll know the waffles are done cooking when they’re golden brown!

How to whip egg whites

Whipping the egg whites cannot be skipped if you’re looking for big, pillowy waffles from scratch! Use a handheld or stand mixer to get he job done.

Some of my favorite waffle toppings include powdered sugar, syrup, sliced fruit, and sometimes whipped cream! These buttermilk waffles make a hearty breakfast on their own, but they are also great with savory sides like scrambled eggs, breakfast sausage, or your favorite bacon!

Some waffle toppings you should try with these from-scratch waffles include:

How to store waffles from scratch

These classic buttermilk waffles will last in the fridge up to 5 days in a sealed baggie. If you’re not going to eat them all that soon, you can also freeze them!

To freeze waffles, let them cool to room temperature before sealing them inside a freezer bag. I love reheating them in the toaster or in the oven (But never in the microwave because they will get soggy that way!)

Tips for making waffles from scratch

Because these waffles are so simple to make, it’s important that you get all the right ingredients. If you don’t have buttermilk, I recommend using whole milk instead of trying to make a homemade buttermilk substitute. You want real buttermilk if you plan on making buttermilk waffles!

Also, don’t skip the salt in this recipe. Don’t worry, your waffles from scratch won’t taste salty at all. The salt just adds flavor to the batter and makes these buttermilk waffles taste even better.

Waffles from scratch are best served immediately, as the exterior loses its slight crispness over time. If you’re making buttermilk waffles for a crowd, place them in the oven on an oven-safe dish and cover loosely with a damp tea towel. (The oven temperature should be very low.)

Classic Buttermilk Waffles…you'll want to stack em' up at your next brunch or breakfast with family and friends! Click To Tweet 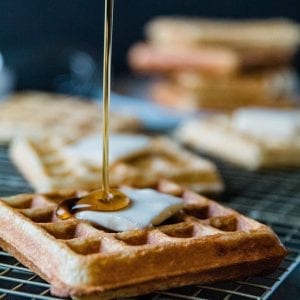 I hope you love these homemade waffles and please be sure to tag @krolls_korner on social media so I can see your creations!

Open
Today marks exactly one month since I posted #Krol

Open
Chicken Piccata 🥰 We just scored a bunch of zuc